Bushnell, leaders in distance measuring devices (DMD), has released the fifth generation of the Tour V rangefinders, their most popular line of rangefinders. Almost all PGA Tour players opt for the Tour V laser rangefinder range, as its performance and reliability are unmatchable.

The Bushnell Tour V5 Shift and Tour V5 are two new models from the Tour V series in 2011. On the Tour V5 Shift model, there is a slope switch that can be turned off during a tournament.

The Bushnell Tour V5 and V5 Shift rangefinders were soon considered the best rangefinder in the world, so let’s find out more about what’s new with these models. 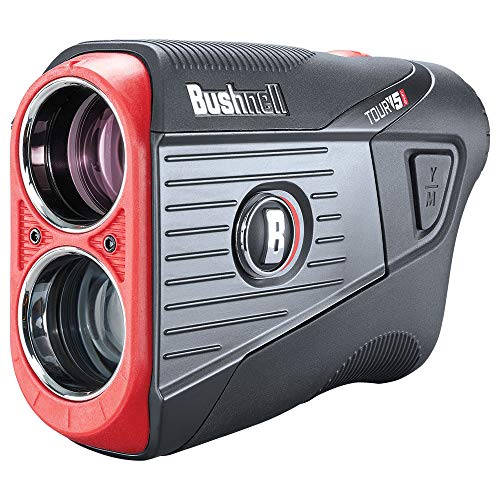 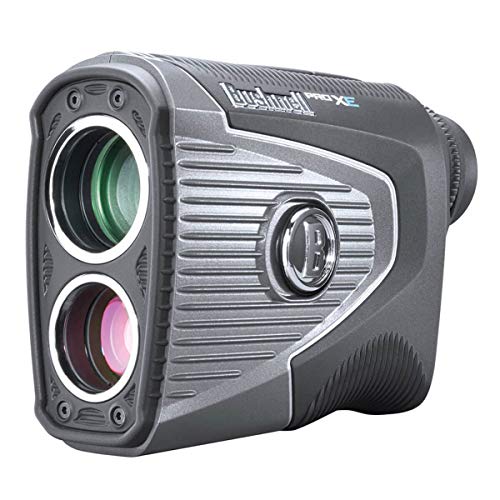 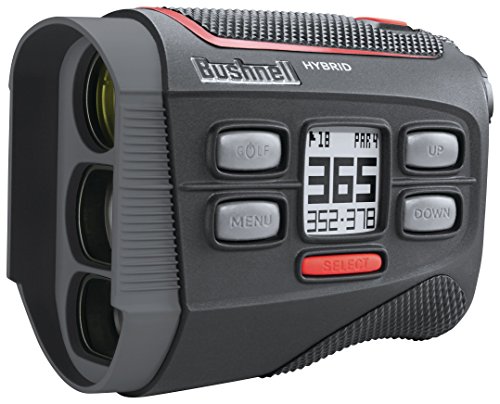 Do you ever wish you could just pull out your rangefinder without having to search for it or take it out of the case? With the new Tour V5, this wish will be fulfilled, thanks to its unique BITE magnetic technology, which enables you to attach the rangefinder to any magnetic surface, such as the cart bar.

BITE technology is new to rangefinders. Right above the device’s display is a magnetic grip that covers a significant area of its side surface. It can be attached to wherever you like on the course, so you’ll always have it at your fingertips.

In recent years, Bushnell laser rangefinders have been distinguished by their patented JOLT technology. It is this technology that delivers the fastest and most accurate location of pins.

The Tour V5 confirms that you’ve hit the pin by emitting vibrating pulses when you point to the flag, similar to previous Bushnell models. When you start to feel vibrations on this device, you see a flashing red ring on the display that makes it stand out.

By confirming the laser locks in twice, JOLT has elevated itself to a new level, setting the bar high for the industry. In addition to the vibrations and red ring, you’ll see a crosshair indicating the yardage to the pin while the vibrations occur.

Accuracy is the biggest concern of every rangefinder manufacturer, and besides the range of features, the ultimate objective of each is to deliver yardages with absolute accuracy.
Bushnell manufactures rangefinders that are mathematically precise, and it has held that position for years.

Additional updates to Tour V5 have made accuracy +/-1 yards possible.

With Bushnell’s new yards-to-meters button, they’ve taken into account players all over the world. You can choose what measurements you want to be displayed.

You are simply going to be amazed as soon as you glance through the eyepiece. This claim is backed up by Bushnell, which says that the LCD display has two times the brightness and twice the contrast of the Tour V4. It is easier to scan the area and plan your shot more accurately with the sightline clearly defined. There is barely any difference in precision between the optics at 5 and 1,300 yards.

The zooming feature has also been upgraded. Tour V5 provides close-up images with a 6x magnification, even closer than the Tour V4.

As well as its sleek, ergonomic, and compact design, it will catch your attention. With the visible Bushnell logo and the black and grey color scheme, the style is sophisticated and hi-tech.

Despite its high-quality case and very long-lasting lithium battery, the device is extremely portable. It’s uncommon to see rangefinders come with a 2-year warranty, but Bushnell Golf does.

Let’s take a closer look at all of the features that make up the Tour V5 and Tour V5 Shift models after we analyze their design and performance.

How does Tour V5 Shift differ from Tour V5?

In Tour V5 Shift, the slope is integrated into the switch, whereas in Tour V5, it isn’t. For those who do not intend to use the slope at all, and do not wish to pay the extra cost, the Tour V5 is the better option. The Tour V5 Shift, however, is for players who like to play practice rounds on the slope or scramble rounds with friends.

Is it possible to disable the slope feature for competitions?

What do you think about Shift? Is it worth the extra money?

Certainly. You can do so if you have the budget. The magnet (BITE technology) and slope technology that changes the distance depending on elevation were the clinchers for me. You can almost feel the magic.

How does the carry case look?

My favorite part of the carry case is how it’s been redesigned. Orange and grey are now the dominant colors. There have also been improvements to the fastening strap, so it can now be opened and closed with ease. Despite this seemingly insignificant matter, it is very important. In the course of a round of golf, you will pull out the rangefinder dozens of times, so if you have trouble opening and closing the carrying case, that makes for an unpleasantly irksome situation. Bushnell makes it a point to keep its cool over the ball so you’ll get the best results.

How far does it reach?

You’ll never run out of space! You can pinpoint your target from 400+ yards away with its impressive range.

What is the turnaround time for yardage?

Instant yardages are returned by its Fast Focus system. You can easily focus on a distant target when you look down at the viewfinder because it has a cinematic layout. If you have sliced the ball into the trees on your layup, for example, you can see the flag when you make a long approach shot or if you wish to see the distance remaining. If you struggle with a slice, you might find the anti-slice downswing drill helpful, or the Jason Dufner drill with a closed stance helpful, or even the three-ball drill that will help you stop coming over the top.

BITE technology – what makes it so cool?

Magnetic fasteners and clips are not installed at all inside the laser, allowing golfers to attach it magnetically to their trolley or buggy without using any additional cases. What’s so special about that? Therefore, instead of fiddling with the case when on course, you can easily access it.

Playing courses that I have never played before will help me?

I would say yes to that. When playing unfamiliar courses, where you only have sight of the terrain, the algorithm update will help you understand the changes in distance elevation during rounds.

97% of all Tour golfers use Bushnell rangefinders, saying how much they trust them and have confidence in them. Bushnell Golf is without question the leading manufacturer of distance measuring devices and one of the leading companies in the world.

With the BITE magnetic grip and Visual JOLT technology, the Tour V5 has redefined the capabilities of laser rangefinders. It is also tournament legal due to its unbeatable slope measurement, which can be turned off if needed.

The downside to all these bells and whistles is that they can be pretty pricey. Models with different features will have different prices, as well. It comes as no surprise that the Tour V5 Shift model is more expensive.

It is the ultimate accuracy and the never-failing performance of Bushnell laser rangefinders that sets them apart from the rest. It is a huge advantage over similar devices that do not boast such an accuracy to know that your rangefinder has minimal error data.

Bushnell has once again established itself at the top of the market with its Tour V5.

Rangefinders May 26, 2022 • 0 Comment
You need a quality rangefinder to improve your shooting. Rangefinders use lasers to measure distance. It is a very useful…

Rangefinders May 26, 2022 • 0 Comment
Are you looking for one that adapts to slopes, is dependable, affordable, and allows you to hit the flag quickly?…

Rangefinders May 26, 2022 • 0 Comment
In order to get the most from your golf laser rangefinder, you should only select brand leaders. It is not…

Garmin Z82 Review – Rangefinder With The Most Features 2022

Rangefinders May 26, 2022 • 0 Comment
By allowing you to see exact details of each hole on any reasonable golf course on the planet, the Garmin…